What started as an off the cuff idea at the Toy Train Paper and Memorabilia meeting at the April 2000 York Meet became a little part of history. At that meeting, Ron Hollander suggested that since September 5th of that year was to be 100 years to the day that the Lionel Manufacturing Company took up residence in a small loft on the 4th floor of 24-26 Murray Street in New York City, something should be done to commemorate the occasion. The idea was met with small enthusiasm, probably because it was 5 months away. Certainly there was no one in the room that did not understand the significance of this anniversary. No one who did not know about the great advances in this hobby that were a result of this company’s upstart. But as the date grew closer, the enthusiasm also grew.

Ron contacted Ron Antonelli for some assistance in getting started. Mr. Hollander had tried to no avail to contact the owner of the building in hopes that a small plaque commemorating the anniversary be attached to the facade. Undaunted, it was finally decided that a small ceremony in front of the building would be appropriate, and that 1:00 PM would be the time. The date was already predetermined. Now remember, this is the day after Labor Day, and right in the middle of the United Nations Millennium Summit. This would only add to an already difficult traffic problem in lower Manhattan. Mass Transit would be an obvious way to alleviate this, but I had created a slight problem for myself. Since I reproduce 2 7/8 Inch Gauge trains, including the Wooden Gondola which was Lionel’s first product, I figured that I would build and run an operating 2 7/8 Inch Gauge layout. Sounded like a good idea at first, and it was met with great enthusiasm, but now I had to build it and get it there.

A call to my father explaining my dilemma resulted in his usual variety of ideas. A trip to Home Depot was in order to look around and get some thoughts about material, finishes, construction, etc. We decided on Mahogany for the table, stained and varnished. The folding legs would be permanently attached so the display could be set up anywhere and very quickly. Within a few hours, a very neat, portable display was completed. Power would come from an automotive battery jumper pack. This was very convenient as it already has a cigarette lighter outlet built in. A cigarette lighter adapter was wired through a Lionel #81 Battery Rheostat and then to the 40 inch circle of ribbon rail and red stained Poplar ties. It looked good enough, but measured 4 feet by 4 feet. A little too big to bring on the PATH train!

The only option was to drive in. So Tuesday morning, September 5, 2000, my father, Leo, 8 year old daughter Danielle and I loaded up Dad’s van and headed out. Traffic was horrendous. Police from three states lined the streets as security was beefed up for the visiting dignitaries. And for those not familiar with the location of Murray Street, (as I was not) it’s about two blocks from City Hall. Anyway, we found 24 Murray and parked. An extra added bonus was that right across the street at 21 was the original home of Diorama Studios. The sub basement of the then silk screen shop was used from October 1948 until April 1949. This is where most of the structures for the famous 1949 Lionel Showroom Layout were built as well as being the location where “Tales Of The Red Caboose” filmed. But that’s another story!

As people gathered in front of the site, the layout was set up. Passersby stopped, asked questions and were surprised of the small area occupied by what was later to be the largest manufacturer of toy trains in the world. As the 1:00 hour approached, the two Rons started to get the ball rolling. Antonelli, a bit worried because of no real “agenda” was put at ease by Hollander assuring everyone that the affair will “take on a life of it’s own”. And it did.

Mr. Hollander began by welcoming everyone. The charter filed by Joshua L. Cohen and Harry C. Grant for the manufacture of “electric novelties” was read. An obviously emotional Ron Hollander almost choked up upon reading the date “September 5th, 1900.” This was followed by a small speech by Mr. Hollander, explaining the early history of Lionel, the products that were produced at the location, etc. This was followed by a small presentation from Mr. Antonelli. Joe Guzzo graced us all with an original 2 7/8 Inch Gauge Steel Gondola from 1904, commenting on it “feeling very happy” that it had been brought back to the very place that it was manufactured. The program ended with Ron Hollander reading an excerpt from his revised edition of All Aboard. All the while my reproductions of an early Wooden Gondola and Electric Derrick car circled the table.

One of the more amazing happenings was a young man by the name of James Kaufman came walking by and saw the group of people gathering. He asked if we were there for the Lionel anniversary. We answered yes and asked who he was, as none of us recognized him. Not a member of any of the train organizations, he went on to tell us that he knew that this was the date and location and that he figured that surely someone would be doing something at this spot to commemorate the occasion. He was not disappointed, and promised to join TCA.

After the formalities, everyone was treated to a “goodie bag” put together by Ron Antonelli and Ron Hollander. It included, among other things, copies of a page of Joshua Cowan’s handwritten ledger, copies of the first two stock certificates issued by The Lionel Manufacturing Company, an actual Lionel Corporation stock certificate and John Felber’s widely circulated “factories list” showing photographs of all of Lionel’s factories from 1900 up until 1969.

Another hour or so had passed and crowds as large as 30 or 40 at a time gathered around to discuss their childhood trains, ask questions and generally have a good time. As the people started to disperse, we figured that it was time to go too. Leo, Danielle and I started to pack up the trains and layout and head for the van. Did I mention that we parked on the street directly in front of 24 Murray Street? That’s right, the day after Labor Day, in the middle of the United Nations Millennium Summit, lower Manhattan, we parked on the street directly in front of the address that we came to gather at. So as we made the 5 or 6 foot walk to load the van, I couldn’t help but think that “The Old Man” was smiling down on us in appreciation of the fact that we appreciated him so much.

The following article was written by fellow collector, historian and friend Joe Guzzo.

Joe Mania’s article entitled “24 – 26 Murray Street, September 5th, 2000, ” which appeared in the January, 2001 issue of the TCA Quarterly, reported on the ad hoc ceremony which I attended in New York City to commemorate the date upon which Lionel was founded. As a follow-up to Joe’s article, I undertook some further study into the exact commencement date of the Lionel Manufacturing Company.

It is my understanding that the reason why the aforementioned day was chosen had been based upon Ron Hollander’s stellar book entitled “All Aboard.” According to Ron’s book, “on September 5, 1900, [Joshua Lionel] Cowen [(then known as Cohen)] and a colleague Harry C. Grant filed to conduct business in New York at 24 Murray Street in Lower Manhattan.” Accordingly, based on this premise, we gathered at that site one hundred years to the day.

After the ceremony, I examined a copy of the certificate which Mr. Cowen and Mr. Grant signed. Ron Hollander read that certificate at the ceremony. While that document was indeed signed and witnessed on September 5, 1900, my subsequent research has revealed that it was not filed with the appropriate governmental authority until September 27, 1900.

It is important to note that nowhere in the document do Messrs. Cowen and Grant state that they were about to commence business under the Lionel name on a specific date. Rather, it simply stated “…That we are conducting and transacting the business of the manufacture of electrical novelties under the name of the LIONEL MANUFACTURING COMPANY.” Therefore, it would appear that one could reasonably conclude, based upon the careful language used in the certificate, that these two gentlemen were already up and running as the Lionel Manufacturing Company on September 5, 1900 and quite possibly prior to that date.

Accordingly, it is this author’s view, based upon the foregoing, that it has not been proven with substantial certainty that September 5, 1900 is the date upon which Messrs. Grant and Cowen commenced residence at 24 Murray Street in New York City in order to conduct business as the Lionel Manufacturing Company. Simply because these gentlemen chose to sign on September 5, 1900 does not rule out the possibility that they might have been conducting business under the Lionel name prior to that date. To be sure, this filing would not have limited their respective liabilities if they were sued for activities which may have occurred under the Lionel name. It would not be until 1902 that they chose to seek incorporation.

I suppose that until more definitive and reliable proof surfaces, the exact date of Lionel’s founding, at this time, remains unanswered.

The quest goes on. 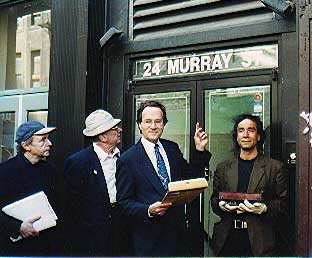 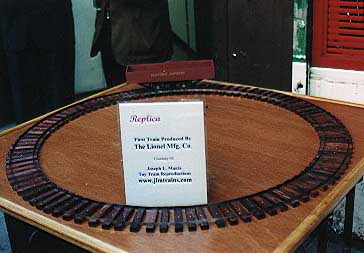 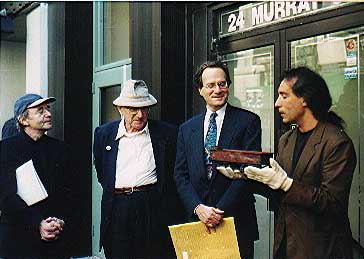 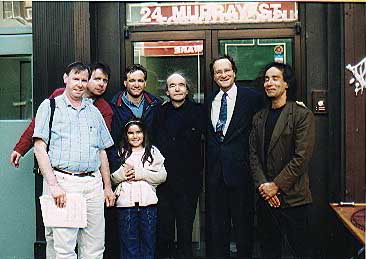 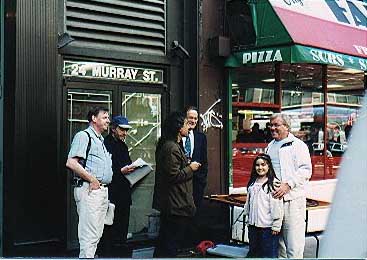 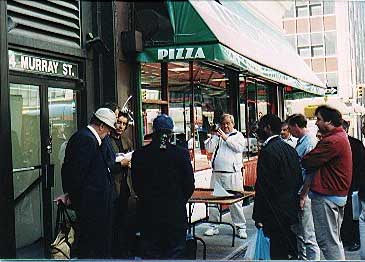 A crowd gathers as Leo tapes the entire event 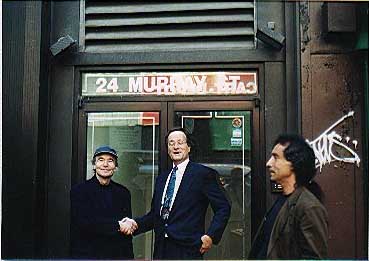 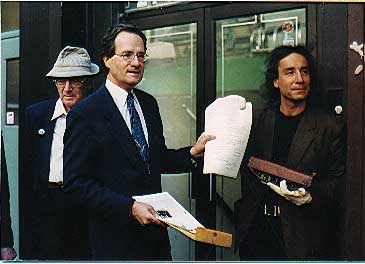