The Lionel manufacturing Company was founded on September 5, 1900 and employed two gentlemen. The founder and namesake, Joshua Lionel Cohen (who would later change his name to Cowen) and Harry Grant. In a third floor loft at 24 Murray Street in New York City they would develop a small electric motor, attach fan blades to it and create a portable electric fan. Even Cowen later admitted that it didn’t work very well. They needed to move on to another project.

While walking past a toy and novelty store on Cortlandt Street, Cowen comes up with an idea. The window display is motionless. He proposes to the owner, Robert Ingersoll, that he can come up with a display that will add action to the window. Back at the shop, he attaches the electric motor beneath the floor of a sort of cigar box on wheels. This is sold to Ingersoll for $4.00 as an animated display. The next day, Ingersoll was back for another. It seems that a customer had bought the car rather than the items it was used to advertise. They were now in the business of producing toy trains.

The 1901 catalog shows the No. 200 Electric Express wooden gondola and the No. 300 Electric Trolley Car. Typically, the version of the wooden gondola offered this year is considered to be the red version without steps, handrails, couplers and brass corner trim. The corners would be box jointed like fine furniture. Also, the Trolley would not have a coupler until 1904, when the No. 309 Electric Trolley Trailer is introduced.

The catalog of 1902 expands the line to include the No. 400 Electric Express Trail Car, a non-motorized version of the wooden gondola. The No. 200 and No. 400 wooden gondolas of this period would include certain niceties as the brass trim on the corners, which still have the box joints underneath, brass steps and handrails and wooden end platforms. A coupler is added as there is now something to couple it to.

The year 1903 shows the greatest expansion of the line. The No. 100 Electric Locomotive is introduced. So are the No. 500 Electric Derrick Car and the No. 600 Derrick Trailer. Also, the gondolas are no longer made from wood, they now have bodies constructed of steel.

The journals are now rectangular cast iron, having been turned brass for the two years prior. The Electric Locomotive is painted green as are the gondolas. The Derrick Trailer is green, but no examples of a green Electric Derrick have surfaced. The Electric Express gondola and its Trail Car now have ribbed side steel bodies and are lettered B&O. This is the only year for this body and lettering scheme.

This year, the No. 340 Suspension Bridge is altered to accommodate the Derricks. The top braces are now arched to provide additional clearance. Atop these arches is a small sign reading “REDUCE SPEED”.

The No. 800 Box Car and No. 900 Box Trail Car are added to the line in 1904. These are commonly known as the Jail Cars due to the barred windows. Also introduced is the No. 309 Electric Trolley Trailer. This year, all pieces, with the exception of the Converse Trolley, would be painted maroon. The Electric Locomotive would be maroon with a black roof, the No. 200 and No. 400 gondolas would lose their ribbed sides and now be lettered “Lake Shore.”

Probably the most intriguing item is the No. 700 Special Show Window Display. It consists of a No. 100 Electric Locomotive and No. 400 Trailer running on a circle of track atop 12 Elevated posts and a Suspension Bridge. The cars are not the ordinary ones though. According to the catalog the bodies are nickeled and highly polished. The mechanism is constructed throughout of phosphor-bronze. Although no examples of this set have surfaced as of yet, we have reproduced one Electric Locomotive. It currently resides in our personal collection.

The last pieces to be released in 2 7/8 Inch Gauge would be the passenger Cars of 1905. Commonly called the Closed Trolleys, The No. 1000 passenger Car and No. 1050 Passenger Car Trailer would be available in three different road names. The most common “METROPOLITAN ST. R.R. CO.”, “MARYLAND ST. RY. CO” and least common “PHILADELPHIA R.T. CO.”.

Over 100 years since their initial introduction, 2 7/8 Inch Gauge trains are back on the rails. Originally produced by the Lionel Manufacturing Company from the period of 1901 until 1905, these are some of the earliest toy trains to be run by electricity.

Great lengths have been undergone to reproduce these items accurately. All body parts are hand formed from sheet metal. Then, as many as 70 of these parts are soldered together to create the body. It is then painted in an authentic color scheme. The earliest pieces are enameled in green while their later counterparts are painted in maroon with their proper red oxide prime coat. Original pieces have this undercoat visible on the inner portions and undersides and so does the reproduction. All pieces are then trimmed in gold leaf lacquer. Finally, gold lettering is applied in the fashion of the original pieces.

All units, motorized or trailer, have a cast iron frame and wheels. The frame is substantial, and compliments the sturdiness of the bodies. All wheels are turned true on a lathe. The wheelsets are suspended in cast bearing blocks which are machined to close tolerances. The bearings are sprung, and the car is afforded a smooth ride even over the bumpiest layout.

The motor consists of a cast iron field which is hand wound with original style flannel insulated copper wire. The armature is of the 6 pole type and is also hand wound with the proper wire. All windings are varnished and motor is fitted with graphite brushes held in place with fibre blocks. The brushes are spring loaded, so no adjustments are necessary. The gears are made of brass and are machine cut, not stamped. This greatly adds to their durability. Motor cars are fitted with a reversing stand at one end which actually works. Moving the lever from one side to the other reverses the motor. The top of the stand is cast iron and the handle is brass. 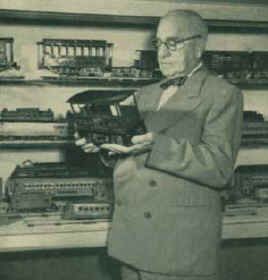